On the outside, it is 'just' a container. But when the door opens, a good deal of high-tech reveals itself. A climate growth container with Grow & Roll to be precise.

In Aalsmeer in the Bosman Van Zaal production hall, two climate growth containers with Grow & Roll are ready to be transported to a large American herb grower who wants to use the container to work out the optimum cultivation recipe for basil. But why a container and not a climate chamber? "Simple", says Carlo Castelijn of Bosman Van Zaal. "These containers can then be clicked onto the back of a trailer. This makes it possible, after a research project, to sell the container or transport it to another location of the company. A lot cheaper than demolishing an entire climate chamber and rebuilding it elsewhere." 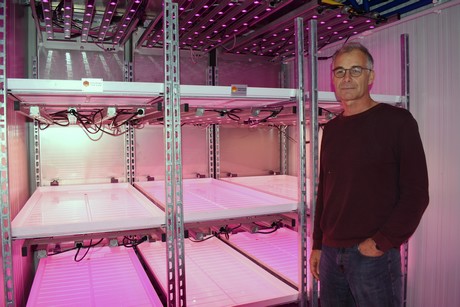 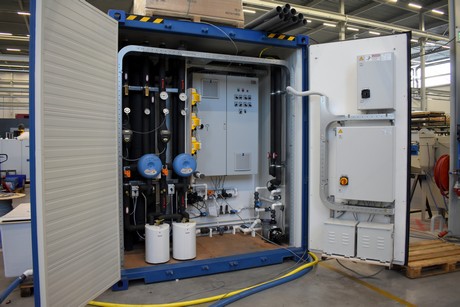 Carlo Castelijn inside of the climate growth container in which three Danish carts fit next to each other. If desired, both sides can also be provided with a Grow & Roll-system with Danish carts. Recently, numbers three and four were built, after the first container had already been built two years ago at the request of another customer.

A total of three extra-wide Danish carts fit in one half of the container. These can be used to create a small-scale multilayer cultivation system with LED and all the bells and whistles that come with it. On the other hand, a growing table has been mounted for research into normal, non-multi-layer cultivation. 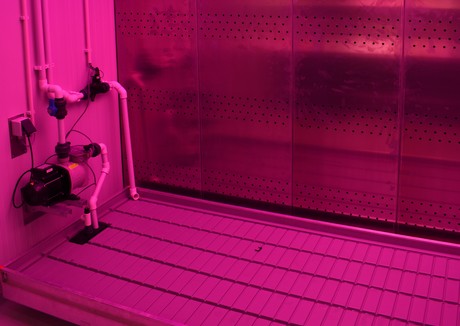 The side containing the grow table, a request from the customer who wanted the table as low as possible. In addition, gutters are hung in the climate growth container so that the customer can experiment with strawberry cultivation. Over the past few weeks, the finishing touches have been put to the containers, which will be transported in December.

Finishing off with the numbers:

For more information, please contact our R&D or Sales department.

December 20, 2019 Bosman Van Zaal wishes you happy holidays and a Happy New Year! Subscribe to our newsletter to stay informed.

Keep me up to date