Hillenraad100 stands for the 100 leading companies in the Dutch horticultural sector. We have been participating since the beginning of 2000 and have been one of the 100s for years. This year we have made a huge leap forward. 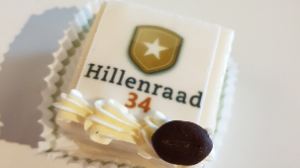 Hillenraad100 stands for the 100 leading companies in the Dutch horticultural sector. We have been participating since the beginning of 2000 and have been one of the 100s for years. This year we have made a huge leap forward. Bosman Van Zaal rises to place 34 on the list! On Friday 1 November, Arjan Kok (CTO) was present in the Ridderzaal on behalf of Bosman Van Zaal, to hear that we have climbed 50 places in the Hillenraad100: "We can be very proud of this, congratulations to all of you!", says Marco Braam (CEO).

Commendation from the Hillenraad Committee

Bosman Van Zaal goes like a rocket and moves along with the waves of a growing demand for horticultural technology, in order to be able to meet the worldwide demand for efficient and food-safe production systems in greenhouses and climate chambers. The most important pressure experienced here is finding good employees in the vicinity of Amsterdam. In this economic boom, you suddenly have to compete with Schiphol, the many logistics companies in the neighbourhood and good technology start-ups.

This provider of total solutions wants to be known as the innovator in the horticultural sector and has therefore focused its efforts on innovators. These innovators produce crops for, among other things, food, pharmaceuticals and ornamental horticulture. Bosman Van Zaal supplies them with more than one product and opts for co-creation.

The merger between Bosman and Van Zaal has already resulted in a great deal of in-house technology and design power, and since March of this year, it has even been under one roof. The customers are companies all over the world in the higher segment of the market, with complex issues. They want innovations such as a greenhouse that is not connected to gas. They want solutions that save on labour and costs and that meet the highest standards in terms of hygiene, safety and regulations. There will be momentum in the activities and market approach of Bosman Van Zaal.

With number 34 we have risen to more than 50 places compared to 2017 when we arrived at number 91. In 2018 there was no Hillenraad100, but the SUB40. In this list of most attractive employers in the Dutch horticultural sector, we were ranked in the Top 20. We wrote a news item about this earlier. You can read about it here. Before that, we were ranked 85th on the Hillenraad100 list. And the years before that we were numbered 92, 99, and 91 again.